He was just another man. Another day, another execution, and crucifixion. Like the many others he was scourged by my men. He was taunted by them and they cast lots for his garment. But he was just a man. He was led along that same path just like so many that had gone before him; killers, traders and other criminals. This man’s conviction was different though, he did not kill anyone, and actually they let that “Barabbas” go in his place. Everyone knows that Barabbas is a murderer, he has done it once and he will do it again. But these Jews are a strange people with their religious customs and rituals. We try to leave them alone, as long as they pay their taxes and mind their business. I feel sure that Pontius Pilot felt threatened. I was among the crowd as I heard them yelling “crucify him”. The Jews had some religious reason to have this man killed. They said he claimed to be their king or god or something like that.  I watched as Pontius Pilot washed his hands in front of them. Those Jews just screamed all the louder. Pontius Pilot does not need a riot on his hands, that’s for sure. What does he care if another Jewish man is killed anyway?

I was there as he walked down the path and one of my men gave him the cross beam to carry. He was able to carry it for some time before he fell. Most men cannot carry it as long as he did. A man was pulled from the crowd to help him. There is usually a crowd of people for the spectacle. This crowd was different, there were women weeping for this man as if they loved him. There were so many that tried to touch him. I still thought he was just a man. My men nailed him to that cross and he hung there like the others before him. He hung between two convicted criminals. I could hear them taunting him but he never retaliated. Come to think of it he never fought anyone. He never fought back or seemed angry about his torture. I have witnessed many men die during the scourging and others passing out from lack of blood. Many almost crawl to their deaths. But this man had something different about him. It was like he accepted his death, he did not seem to have anger, regret or confusion. He was in pain, that was evident but he somehow seemed at peace, yes that’s the word I would use “peace”. I don’t know how that is possible in this situation but he was at peace. Even as he hung there he was so calm. He spoke to a woman that I assume was his mother and she cried but not with the panic I usually see in the women that surround these criminals. He was so compassionate and kind to her. He only asked once for a drink. Then with desperation I heard him cry out “My God, My God why have you forsaken me?” a little bit later in a loud voice I heard him say “Father, into your hands I commend my spirit” it was then that I saw him draw his final breath. The sky immediately opened up and the earth shook and I felt something I had never felt before. I looked upon this man and it was then that I realized he was not just a man but he was the Son of God.

As I stood there with the earth shaking and the sun going dark in the middle of the day I prayed to that man’s God to forgive me for having any part in this man’s death. I stood there for quite some time looking upon the limp body hanging there and knew that my life would never be the same again. 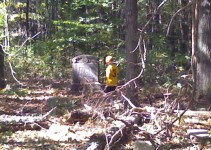 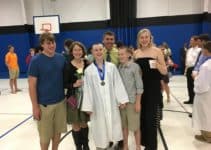 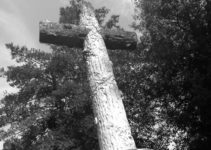