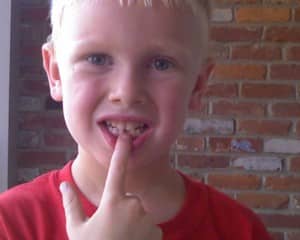 The anticipation had been growing since the summer time.  We discovered that Spencer had an extra tooth, so we called him “shark tooth”, because sharks have extra rows of teeth.  Apparently the permanent tooth came up behind the baby tooth.  He did not want to lose his tooth before school started so that he could show his friends his “shark tooth”.

He was able to show everyone and slowly the baby tooth started to get wiggly. The anticipation grew to a little bit of fear, no one had yet pulled a tooth from his mouth.  What would it feel like?  Would it hurt?  Would he bleed?  He set off to school Friday morning knowing that it might be the day the little tooth would fall out.  He tucked a sandwich baggie into his pocket just in case.

As I stood waiting for Spencer to come out of school I was bombarded by his little body upon me.  He immediately pulled his crumpled up baggie from his pocket and revealed his empty place in his mouth to me. He was so excited that he lost his first tooth ever.   Because he lost it at school the teacher gave him a certificate stating this fact.  Spencer being the clever boy he is put the certificate on display in his window so that the tooth fairy would not pass by the house without seeing that he lost his tooth. He carefully put the tiny tooth in it’s plastic bag under his pillow and drifted off to sleep that night.  He awoke very early and as he slid his hand under his pillow he grasped the plastic baggie that was now filled with a one dollar bill.  Oh the joy! He was jumping up and down running down the hall to tell me. “The tooth fairy came, the tooth fairy came! She must have seen my sign in the window.”  The joy on his face was priceless.

“Amen, amen, I say to you, unless a grain of wheat falls to the ground and dies, it remains just a grain of wheat; but if it dies, it produces much fruit.  Whoever loves his life loses it, and whoever hates his life in this world will preserve it for eternal life.

Spencer did not want to lose his tooth but in doing so it made room for his “shark tooth”.  How many things in this life do we not want to die to?  Sounds extreme doesn’t it, die to?  Well an example in a mom’s daily life is dying to our wants not our needs.  Wanting to have peace and quiet, wanting to read a book instead of play a board game with your child.  Moms die to ourselves everyday by being selfless.  If we as moms consider how often we die to ourselves daily we would be amazed.  But in giving so selflessly we are not really denying ourselves we are learning to grow.  I am not advocating dying to our needs, we need our meals, showers, sleep and at least a little peace and quiet to function.  I am advocating dying to our wants.  If you would much rather be watching tv but instead you chose to spend time with your child, it is  not only your child who grows from the choice you do as well.  Even though you put off something you wanted you showed your child he/she is your priority.  You took time to get to know him/her a little bit better you grew in that relationship without even knowing it.

We as spouses die to ourselves everytime we decide to do the dirty laundry again, to clean that bathroom floor to not go nuts on our spouse for not helping more often.  When we decide not to say exactly how we feel at that moment but instead think that we are doing this out of love and it is ok to give selflessly.  When we stop thinking so much about what we want and give instead we grow, we mature and we learn how to love more deeply.

How do you die to yourself daily,  as a mom, as a spouse, as a friend?  Think about the course of your normal day and pick out all the times you give selflessly.  Reflect on how that giving effects those you give to as well as yourself.  It’s worth it!  It’s extremely painful sometimes but it is so worth it!

God sent his only son to teach us how to die to ourselves and to learn to love selflessly. It is against the grain of our culture but it is the right thing to do.  From that selfless love you will gain more than you ever imagined you could.  So don’t be afraid to lose that baby tooth it will be replaced by a permanent tooth.  Yes it may hurt and bleed a little bit but the reward is a permanent love in a growing and maturing relationship with God and those around you. 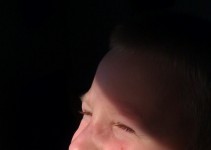 Tags:Children, die to self, Give, Love, Mom, Relationships, Selflessness