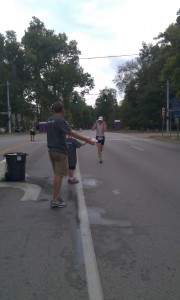 My husband and son passing out sponges at the Louisville Ironman

The beginning of our volunteering shift at the Louisville Ironman started slowly for us. However, the participants were starting their third leg of the triathlon. They had already swum 2.4 miles in the Ohio River and biked 120 miles for hours. Now they were running their 26.2 mile marathon and it was only 92 degrees out with the full sun.

Our family; my husband, myself and our 4 children ages 13, 11, 9 and 7 were there to volunteer our help to these exercise warriors and to see my husband’s best friend Jason running his first Ironman. It started slowly we handed out waters, fruit and ice but then we moved up to the sponges. We would soak the sponges in ice water and hand them out to the packs of runners on both sides of our water station. Some would yell as they ran up to our station “Sponges, water, ice!” Others did not say a word they were totally in the zone. Some would just extend their hand and we would hand them the sponges to cool down their bodies. Others would say “Thank you” and some said “Volunteers Rock!” My daughter said she heard one guy saying “the pretty ponies look at the rainbows.” She said “Mom I think he was hallucinating.” We were there for 4 hours sweating, moving, freezing our fingers and trying to give encouragement to these ultra exercising people who were pushing the limits of their bodies.

It was an awesome experience for all 6 of us. My husband who ran the Boston Marathon this year said it took him straight back to Boston. My children said “It was hard work but it was fun.” It gave all of us an appreciation for the dedication and endurance these athletes put forth. As a runner it gave me a new found appreciation for the volunteers who have given me water at the races I have competed in over the years. Our friend Jason killed that race. He did it in 11 hours and 25 minutes! That is absurdly fast for your first Ironman!

The best part for me was volunteering with my family. I really enjoyed working beside my children and watching their faces light up when the racers took their waters or sponges. They especially liked it when they could make them smile, laugh or say something funny to them. This is an experience my children will not forget. When we left they were tired and soaking wet. As they climbed into the van they said “That was fun. Can we do it again next year mom?”

You can have a clean roof with less effort than you think. 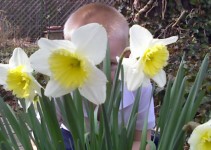