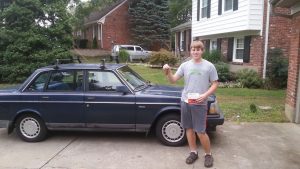 Yep, that’s my oldest son. He is sixteen and has had his permit since his birthday. In a few short weeks he will have his restricted license which means a parent no longer has to be in the car with him. I don’t want to think about that day.

We told him when he was 12 years old that he would have to buy his own car with his own money and encouraged him to save his money. When he was 14 we told him, not only would he have to buy his own car, but he would also have to pay for his monthly insurance, car repairs, and gas. He listened well and started saving his money 4 years ago. He started his first job this summer and has not taken a penny out of one paycheck he earned. He has saved every cent for a car.

He has been looking at cars for a few months now. When he found this Volvo 240,we were very pleased, especially compared to the fixer uppers that he had high hopes for. He loves this car, it had all of his requirements; it had to be in the 80’s, rear wheel drive, a manual transmission, and four seats. He picked up driving the manual transmission in a matter of minutes. He paid for the car in full and will start paying insurance with the first bill. Many parents give their teen their first car. As a teen my dad purchased an AMC Spirit, not my favorite car. He said you will pay once a month for it. When the car is paid off then you will start paying insurance montlhy. My husband and I believe in teaching our children how to work hard to earn money, how to save it, then to buy what you really want. Because he purchased this car with his hard earned money he will appreciate it!

I think our culture needs to teach the value of not spoiling our children, denying them some things so they will be able to appreciate them in the long run. My son can be proud that every penny of his first car was earned by him. We also hope it teaches him a deep sense of responsibility. As his mom I could not be any prouder of how he set a goal earned the money, and purchased the car. Being able to witness his appreciation for the car is very rewarding. 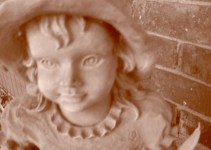 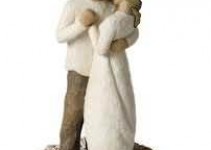 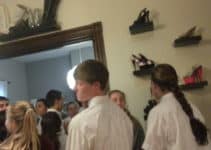