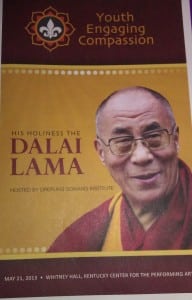 Program from the presentation of the Dalai Lama I attended

In October I was told about the Youth Engaging Compassion initiative. I started a Compassion Committee at my children’s grade school to talk about how we could help build a community of compassion. Last month I held an essay contest for the middle school students. The theme for the essay was The Dalai Lama: how he leads a life of compassion and how we can as well. The winners were chosen to go to see the Dalai Lama in person.  It was an amazing experience.

Without the pomp and circumstance, without a formal introduction and in the middle of a student reading an essay about compassion out wandered the Dalai Lama onto the stage of Whitney Hall at the Kentucky Center for the Arts. He walked up to the student reading and told her ever so sweetly to continue. When she finished he hugged her and began responding to her essay. He was humble, compassionate, extremely intelligent, insightful and hilarious. I just wanted to pinch his cheeks.

He spoke of compassion taught on the most basic level by our mothers. We were enlightened by the story of him as a boy riding on his mother’s shoulders on the farm as she worked. He was the youngest and said that he received much affection from her; so much affection that his older siblings were probably jealous. He said for those who did not have that experience and instead were abused or neglected that they were not able to trust others, feel secure or have self confidence. He said it can be learned later but it is not as natural for them. Then he sneezed and as he was blowing his nose he said “You should say God Bless you!” Laughter broke out among the audience. There was so much laughter and joy in that auditorium.

Everything he said was so clear, not his broken English, but his message. He said “I have 7 billion brothers and sisters. If we look at the world this way then everything changes.”  Compassion should be taught in school as a part of the curriculum. Whole mind learning is a complete learning of how to deal with emotions and have “mental hygiene”.  Our minds as well as our bodies should be healthy. We should not be enslaved by anger.  Secularism is a way of respecting people of every religion and without any religion. If we had secular education, respecting every religion and lack of religion and taught morality and ethics compassion would grow and society would change for the better.

His belief in the education of compassion is a compelling one in light of all of the recent violence in our world. If we can start at the most basic level of loving our children and giving them a holistic education with morality and ethics at the core then our world indeed would be a more peaceful place to live.

He smiled and chuckled often like a person so filled with joy that he might overflow. It was not a surface happiness but a joy that comes from inner peace and love for everyone present in that place. He laughed, told stories, answered questions and just spoke to us. He spoke not from a podium or some aloof place in life but from his heart to ours like he was loving us with his words.  I took pages of notes that I will continue to write about in the future so many nuggets of knowledge. I laughed often and smiled almost the entire hour he was speaking. I was in the presence of the Dalai Lama and he lifted me up with his sincerity, honesty and love and openly gave me knowledge and pure joy that I will never forget and try to always give. It is an experience I will cherish for a lifetime. One cannot forget when they are in the presence of simple and pure joy. 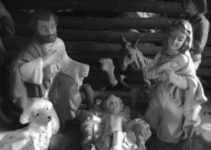 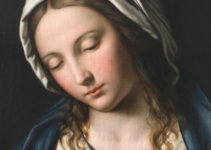