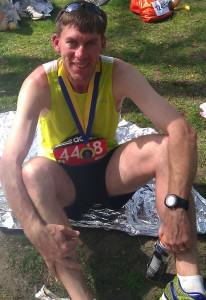 My husband after he ran the Boston Marathon

We flew 829 miles from Louisville to Boston for my husband to run 26.2 miles in the second hottest Boston Marathon ever. This is a picture of Aaron about an hour after the race. Over 2,100 people were treated for heat stroke, dehydration and other related heat issues. Many people chose not to start the race because of the strong warnings from the Boston Athletic Association due to the extreme temperatures. However, my husband is a determined individual. Many people try to qualify for the Boston Marathon, a race on the same level as the Olympics to runners, for years and years. Not my husband. He ran his first marathon less than 1 year ago in the Derby Marathon here locally. He qualified for the Boston with a 3 hour and 12 minute time. Then he ran his second marathon The Indianapolis Monumental 6 months later and shattered that record with a time of 3 hours and 5 minutes. Then 6 months later we packed up and went to Boston for the marathon of a lifetime!

As soon as our plane landed in Boston we heard the weather forecast HOT! We landed on Friday and heard so many reports until Monday morning. He woke up at 3:30 in the morning to get everything together. He was shuttled from the hotel to a downtown bus. Then he was taken more than 27 miles outside of Boston to Hopkinton to wait in a place called the Athlete’s Village for the next 2.5 hours waiting for the start of the race. He heard people from France, Mexico, Germany, Ireland, and across the United States talk about the marathon he was about to run. He found that this was even more amazing than he realized. He started the race in the first wave at 10:00 am. The heat was already at least 73 degrees which to a runner feels like 83. He said the sweat came in the first mile, which had never occurred before. He was keenly aware of his body the entire race, hydrating more than ever , running through sprinkles, searching for shade on an unforgiving course with full sun and absolutely no shade. His research of the course had lead him to believe there would be 4 major hills but his belief was broken after miles upon miles of what seem like a continuous uphill climb. He ran at a 6:58 pace for the 1st 8 miles and then began to back off to a 7:04 pace. He said that it was brutal and he finally tore off his pace band on his wrist, helping him to track his pace, and stopped looking at his watch around mile 20. He just began to run on how he felt. He thought he was running 10 minute miles but he never went slower than an 8:18 on heart break hill. He watched as a runner was taken away on a stretcher at mile 25 and prayed he would make it to the end. He crossed that finish line depleted but upright without needing any medical attention. His time was 3 hours and 15 minutes! He was only 10 minutes slower than his personal best. He completed it along side so many from around the world who had dreamed of this moment but not of the tormenting heat.

A wife could not be prouder, my children could not smile bigger, his mom could not cry less noticeably, his friends are in awe that he did not just finish this race he conquered it. The marathon is like life it takes practice, endurance, patience, pace, dedication and determination. It was the run of a lifetime, a journey that will always give him bragging rights but more importantly the belief that if he can do that race in that heat and overcome it then nothing is impossible.

how to remove roof stains 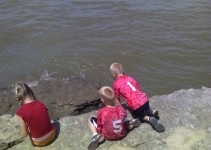 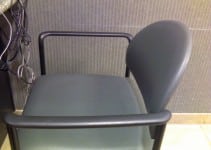 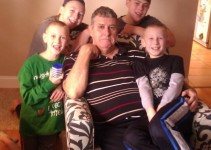